Could it happen here?

Early in the morning of the 14th June 2017 a fire caused by a faulty fridge freezer on the fourth floor of the Grenfell Tower apartments in London caused a catastrophe in which 71 people lost their lives and a further 70 suffered severe injuries. The fire raged for 60 hours before it was finally brought under control. 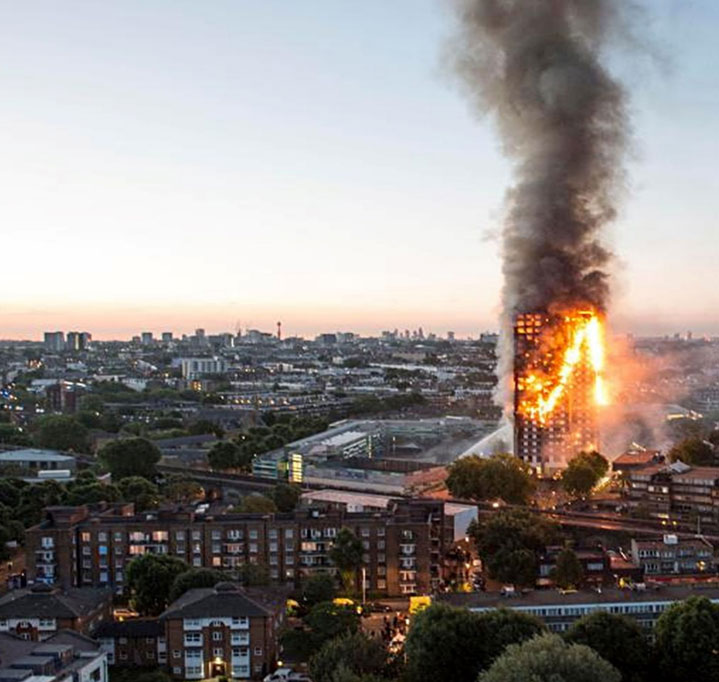 So could it happen here in Indonesia? The simple answer is yes it could and more alarmingly it frequently does!  In November 2016 a fire raged through the Neo Soho Development in West Jakarta. The number of casualties is not known. In March this year Jakarta Governor Anies Baswedan launched a raid on the Sari Pan Pacific hotel in central Jakarta citing the “flaunting of building regulations” He vowed to inspect a further 80 high-rise developments in Jakarta. Note 1

Furthermore, these incidents and accidents will continue to occur unless serious changes to the way these towers are constructed and supervised are introduced.

The enquiry into the Grenfell fire has not concluded, however it is likely that the combustible cladding and outdated fire regulations will be called into question.

Indonesia on the other hand has adopted internationally recognised standards and codes such as NFPA (the US National Fire Prevention Association) and indeed SNI (Standard National Indonesia). Buildings must by law, be designed according to these codes in order to satisfy permitting requirements.

The problem in Indonesia however, is not generally related to design or coding but in the application and enforcement of the codes on site and in the sloppy execution of the installations and flaunting of regulations as indicated above. There is also a question over the certification processes and the diligence and competence of those responsible for inspection, certification and even the validity of the certificates themselves.

Installations are often carried out using low grade contractors with unsupervised unskilled workers who know nothing of codes and care little about quality or fitness for purpose. Even where Construction Management consultants Indonesia are appointed they are under constant pressure to cheapen their service. Their staff are often inexperienced and susceptible to pressure and or “sweeteners” from contractors.

The problem can be best illustrated by reference to an actual development of Mid-Low cost apartments including a budget hotel constructed recently in an area of greater Jakarta.

This Development, appears to have been approved as being fully functional by issuance of the “Sertifikat  Laik Fungsi” (SLF) and signed by the local authorities on 10th January 2017.Note 2

The purpose and validity of this certificate has to be questioned.

The building Owner was obviously aware that all was not well as two months later on 29th March 2017 he appointed PT Kandu to conduct a Due Diligence Study of Building Services systems including lifts and fire life safety systems. Kandu was  also appointed to oversee the rectification of defective work identified by the Due Diligence Study.

The alarming issue here is that a number of apartments were already occupied and the Budget Hotel had been fully operational since 21st May 2016 in a building that was patently not fit for habitation.

The Due Diligence was completed – MEP Services 11th April 2017. Lifts – 27th April 2017.  The studies confirmed that despite issuance of the SLF fire life safety installations were inoperable and the development consequently unfit for human habitation. The most serious issues identified are discussed below:

70% of all people killed in fires die by smoke inhalation. Most buildings are designed in such a way as to prevent fire / smoke from spreading from one area to another. For example, every apartment in a typical high rise will be designed as a fire compartment. The apartments each side and above and below will too be separate fire compartments. The corridor outside the apartments will also be a fire compartment, as will the individual service shafts and escape stairs running vertically through the building.

Any penetration of these compartment walls, floors must be fire / smoke protected and rated such that fire and smoke can be contained. The codes governing these penetrations can be quite complex but generally:

Our findings in this Development. 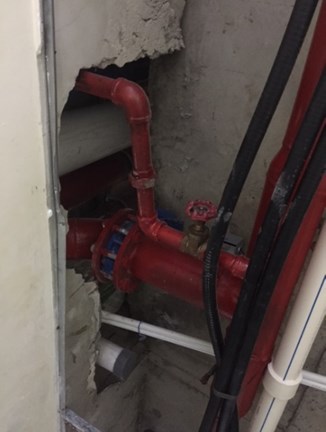 Fig 1 Fire hydrant passing through fire compartment wall with no fire stopping installed. This sloppy installation is between corridor and fire escape stair and it occurred in four towers on every floor in this development! This also prevents the fire escape stair from being pressurized. See Emergency Escape Stair below. 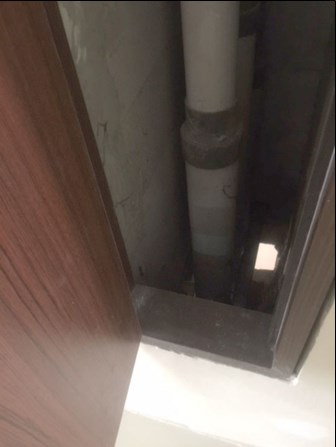 Fig 2 Service shaft. No separation at floor level and open to apartment below. In a fire this shaft would act as a chimney drawing and possibly distributing fire and smoke to floors above. Note too the non-rated hollow core timber door.

Note 2  – This is the local government “Functionality Certificate” confirming that the building has been constructed in accordance with original approvals and that Building Services, Lifts, Fire life safety systems both passive and active have been installed in compliance with the appropriate regulations.

All high-rise buildings must be equipped with hydrants and sprinkler systems which comprise the following elements.

A typical system would be designed with a fire water tank, in some cases this can be the swimming pool or similar large volume of water.

Our findings on this Development.

Fire water is distributed via the fire risers and laterals which can be isolated at each floor level for maintenance purposes. There should be a pressure gauge installed at each floor in plain sight so that the system can be seen to be operational.

Our findings on this Development. 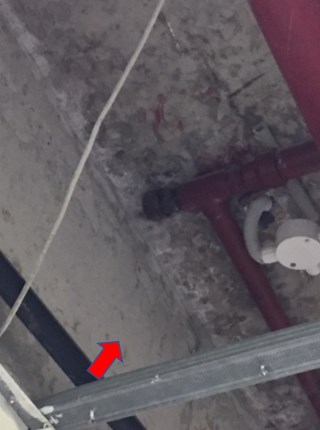 At time of writing we understand that the fire detection and alarm systems are inoperable.

Stating the obvious. The purpose of escape stairs is to provide safe means of exiting the building in an emergency such as fire. For this reason, the whole stair shaft from top to bottom is pressurized to prevent fire and smoke from entering the stair well. For this to work effectively the stairwell has to be sealed thus no openings in walls and doors kept shut with door closers. 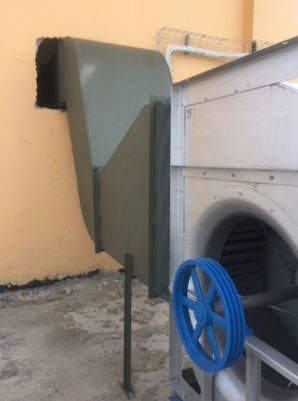 Fig 5 Pressurization fan not connected and penetration of wall not made good. 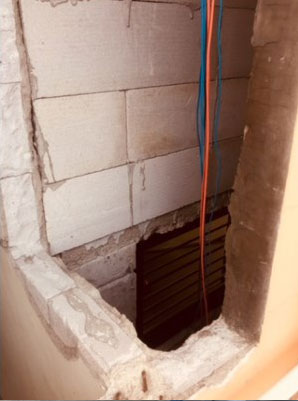 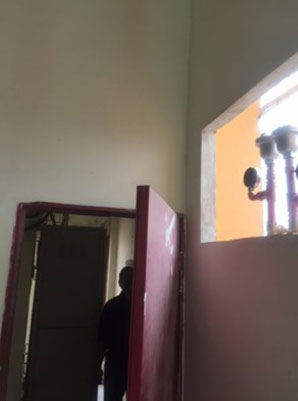 Fig 7 How to maintain pressure in stairwell with penetrations in walls and no door closers on fire doors?

The Due Diligence studies and this brief report clearly indicate that at the date of the issuance of  Sertifikat Laik Funksi the building was not in a habitable condition but nevertheless it was occupied including a fully operational hotel with no functioning fire hydrant / sprinkler systems. This suggests a callous disregard for human life and of regulations put in place to protect life.

The Consultant appointed to carry out the Due Diligence and oversee rectification of the works was stopped On 10th February 2018. At that time the rectification works were still incomplete, including vital fire life safety systems. There is no reason to suppose that the situation has changed to date.

This report reflects the condition of just one development in greater Jakarta and at time of writing, 15th August 2018 this particular Developer has at least two similar developments under construction. This situation raises serious questions that warrant further study such as:

1. How can a building that is patently unfit for human habitation gain a “Sertifikat Laik Fungsi”?

2. How can Developers gain license to operate a Hotel on premises with these conditions?

3. How many buildings across Jakarta and Indonesia as a whole are in similar condition or worse?

With over 20 years’ experience of construction in Indonesia and working as a construction management consultant Indonesia, it is the writer’s experience that left unchecked many buildings would have non-conforming fire life safety installations. Particularly breaches of regulations concerning passive fire protection such as compartmentalization.

In 2002 the government passed into law  The law no 28 on Buildings  which adopts international building regulations and codes such as The National Fire Prevention Association (NFPA) regulation from the USA. Unfortunately, whilst they have been passed into law, the laws and the embedded regulations themselves are poorly understood by many  Designers, Contractors and even Construction Managers.

Worst of all the authorities who are supposed to uphold and enforce the laws are disinterested and ineffective or solely interested in using non conformance to their personal advantage. This fact is not lost on unscrupulous Developers who are quite happy to pay the bribes to gain the occupation certificates regardless of the condition of the building as is demonstrated above.

PT Kandu has been operating as Project and Construction Management Consultants in Indonesia since 2007. We have a record of turning in regulatory compliant buildings despite the challenges described above.

Our Clients have the benefit of certainty and peace of mind knowing that their project is in safe and capable hands. “Right from the Start”.